Evelyn Krasnow has been named chief marketing officer. Krasnow was formerly a marketing leader at Bird.

Sydni Gethner, who was previously a regional manager at Interior Define, is Fernish’s new head of sales.

Jorge Montoya has been named vice president of operations. He has more than 20 years of experience and previously worked in operational excellence at Target.

Tessa Peshke has been named head of multifamily, and will be leading more of the B2B2C efforts and focusing more on multi-family buildings, such as apartment complexes. Peshke has more than 20 years of experience and was previously vice president of customer success at Rent Dynamics.

“We are growing, and to continue to grow, evolve, and perform at the highest level, we added these leaders to up-level our strategy as well as execution, all with a keen eye toward building a team and a culture that is consistent with our vision 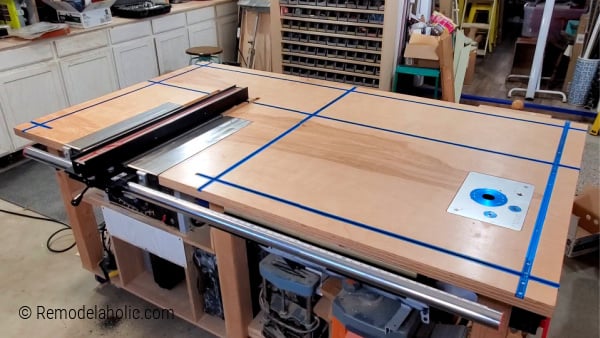 It’s been about 3 years since we built our table saw workbench and we’ve had lots of questions about how it’s holding up, what table saw fence we use, and more. See our update and answers to FAQs here.

See all the details of the workbench build here and get the plans here. Have a question we didn’t answer? Leave us a comment below or on the YouTube video.

I built the table saw workbench to meet a need in our garage shop — a great work surface in our limited space.

Our garage is about 22 feet wide, with a beam in the middle of the space.  The workbench is 4 feet wide by 7 feet long, and 36″ tall (including the rolling caster wheels).

I couldn’t use the full 8-foot plywood in my shop space, but if you can in yours, awesome!

The size and tool layout works great for our space and needs, and I love the T-Track system and accessories!

What would you change about the table saw workbench?

For over 3 years, this table saw